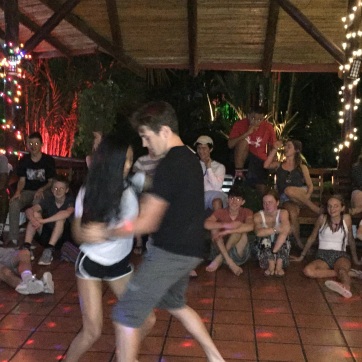 Harris Rutherford
Last night was the most active out of all of them. Almost everyone, around 100 kids at one point, were on the dance floor. At first we were doing the salsa with each other trading off partners after every song, I danced with Juan for a while. But there was still a bit of hesitancy between the everyone. But then they started playing songs that we have all heard and suddenly there wasn’t little groups on the floor just one big circle in the middle with everyone one on the dance floor apart of it. It just shows our class coming closer and closer together and how things we wouldn’t normally think of as connections can really make a difference.

Izzy
Last night showed the true community aspect of convent and Stuart hall. As the whole class danced together, there was so much love and friendship that everybody felt included. Everyone was so happy that it was such a bonding experience. This moment that I spent with all of my peers will stay in my heart forever and all of my classmates hearts. There are very few moments like these where we can spend such a special time with the whole class and as we graduate and go our separate ways all of us will remember this night. This night represents the love, friendship and such strong community that not only our class has for each other but for the whole

Mark
My group and I went to the school yesterday. At the school I played soccer with the kids there and had a great time. While observing these kids for an hour or two, I saw something that I hope will change how I approach situations in the future. This thing I saw in the kids was their joy. These kids, despite not living in the best conditions, were making the best out of what they had. I believe that this links to the 3rd goal of the Schools of the Sacred Heart. This goal, a social awareness that impels action, makes us come out of Stuart Hall and Convent as different people and volunteering at the school was a perfect example of that.

Nick Ong
Yesterday, I rode a horse named Osa. Osa means “female bear” in Spanish. She certainly was a bear of an animal. She really enjoyed being in the front of the pack, perhaps due to superiority issues. As she made her way to the front, she tried to step around and slipped into a ditch. Osa went absolutely insane, thrashing and jumping around. I held on like she was a mechanical bull. I saw three hands shoot out and pull me out of the ditch before Osa could hurt me. I was hesitant to get back on, but I found the courage and determination to continue riding. Once we reached the waterfall, a couple of my friends convinced me to jump from the highest point of the waterfall. I remember climbing up and reaching the top. As I stared out at my surroundings, I realized how high I actually was and started to regret climbing up for the jump. I breathed and took a leap of faith. Jumping off that waterfall was one of the most exhilarating experiences I’d ever done. Last night was also crazy, as almost everyone in sophomore class hit the dance floor. Costa Rica has really been a connecting experience for the entire sophomore class, girls and boys. Pura Vida from Costa Rica to San Francisco. 🏖

Skyler Dela Cruz
In the afternoon, the Stuart group had a chance to go to the beach. The beach showed the true beauty of the coast of Costa Rica. I enjoyed it very much. Last night, we all learned to salsa and danced throughout the whole night. I feel that this party took people out of their comfort zones and brought people closer together. I truly felt the dance and party filled environment to expand away from my comfort zone and begin to dance and talk with other people. Spending more time with the people you don’t know and encouraging the people who like to be separated truly was a blast. In the morning, we reflect on being or doing something today that you wanted to be, I wanted to be the engager. Being able to do on Thursday showed another side of me that I really enjoy being. Rafting was very fulfilling experience that strengthen a bond between our raft. We were all in sync with each other, but we had to add a new person to our raft causing adjustment which we handled very well.

View all posts by RJOC